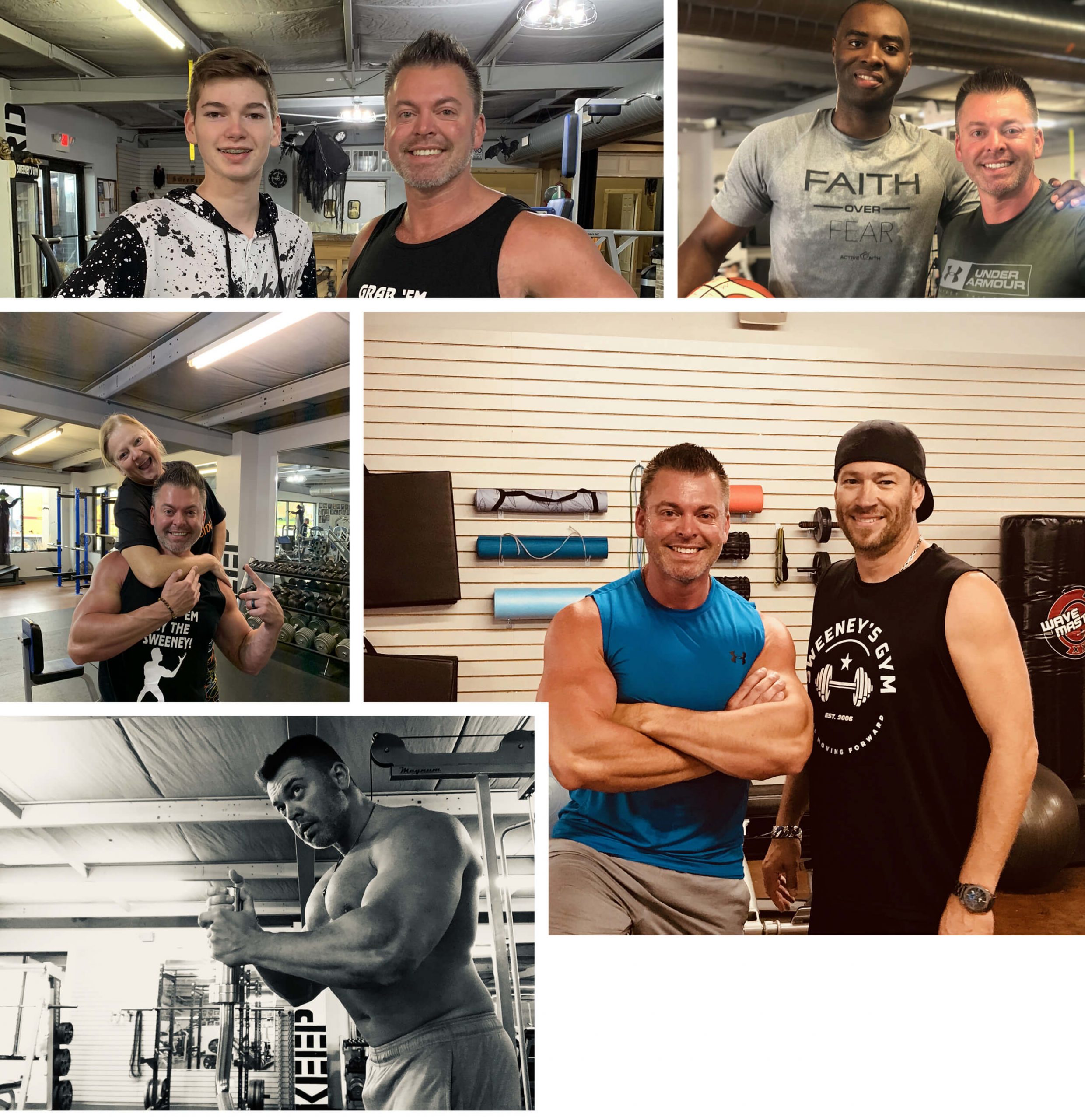 It started early. It started in a garage. When Michael Sweeney was 14 years old, his grandparents recognized his passion for fitness and hired a gold medalist personal trainer to help him grow as an athlete. Michael thrived, quickly becoming interested in the science of health and well-being. Very soon he began training friends in his parents’ garage, and, with money earned working at a local fitness store, he gradually grew his collection of weights and equipment until he’d filled the space. He began to promote his services and cultivated a small pool of clients. Ken Rupena, owner of the Clarion Hotel near Mitchell International Airport, came across one of Michael’s pamphlets and signed up to train with him in his now-well stocked garage-gym.

Impressed with his attitude, techniques, and drive, he said something Michael would never forget: “You are better than the garage. You have to be able to show the world what you can do.” That conversation escalated to an offer to rent space in Rupena’s hotel, which became the site of Sweeney’s Gym. It’s a place that’s now known far and wide as a welcoming environment for beginners and experienced fitness enthusiasts alike; where men and women looking to get back into shape after some time away from physical activity can comfortably coexist with pros training for upcoming competitions. It’s an atmosphere carefully created and cultivated by Michael – – truly “Powered by Sweeney.” “It’s not a fad gym,” he explains. “When you come in here you don’t get all the fluff, you don’t see all the latest and greatest trinkets. We stick to all of the bread and butter movements because they work.” But, Michael didn’t forget the garage. As his original gym neared its 10th anniversary, Michael is working to take his vision to the next level. Because the drive to succeed and create does not limit itself to the boardroom or the gym, and because today’s hectic lifestyles and mobile offices make it harder and harder to connect with persons who may hold the key to a collaborative breakthrough, Michael envisioned a new kind of dynamic community, where ideas are born and energy is shared. A place where mind and body are challenged and grow.

Owned and operated by Michael Sweeney, a local fitness expert and personal trainer, has built a community at his gym, a place where people can go to work out, unwind, and get fit. Over the years, Sweeney’s Gym has seen a variety of clientele, including WWE Super Stars, Nashville Country performers, and our very own Miss Wisconsin, Bishara Dorre, just to name a few. Stacy and Leif sat down with Mike Sweeney to hear more about the story behind Sweeney’s Gym and how his business has grown and developed over the past 10 years.

Fitness has always been a passion of Michael’s, and his grandparents recognized this when he was very young. When Michael was 14 years old, his grandparents hired a gold medalist personal trainer who helped Mike grow as an athlete and as a mentor. Growing up, he trained his friends in his parents’ garage, acquiring equipment over the years working at a local fitness equipment store. He traded his labor for weights and various machines, and he even made a cable system out of pulleys through the rafters of the garage.

“By the time I was 18 and graduating high school, I had a 2 ½ car garage, filled wall to wall. Every square inch was full of weights that I had worked for, purchased, and had trained numerous friends on” says Michael. His hobby ultimately became his career, thanks to Ken Rupena’s confidence and trust in Michael. At the time, Ken was the owner of the Clarion Hotel, and he came across one of Michael’s pamphlets. He met with Michael about training him at his home, and he immediately saw potential in Michael and his business. So, he offered Michael a space to rent at his hotel, in order to start his own gym, a place to bring his training to life. Michael explains what it was like to get justification that what he was doing was making a difference: “The words that he used, I still appreciate to this day: “You are better than the garage; you have to be able to show the world what you can do.” Michael recognized this as the perfect opportunity to develop his growing personal training business, and since then, he has never looked back. Since Michael opened Sweeney’s Gym in 2006, he has rallied around the idea of creating a tight-knit community, a place where people can feel comfortable while working out.

Sweeney’s has worked hard to create a good fitness atmosphere by ensuring that equipment is functional and available, cleanliness is a priority, and access to the gym is available 24/7. Michael describes Sweeney’s Gym; “It’s not a fad gym. When you come in here you don’t get all the fluff, you don’t see all of the latest and greatest trinkets. We stick to all of the bread and butter type movements because they work.” Ultimately, Sweeney’s Gym has been able to successfully create a community, “a group of people that are serious about fitness and don’t like all of the hassle that corporate gyms offer.” May, Sweeney’s Gym will be celebrating its 12th Year Anniversary. For many years, Michael has thought about opening up a second location, but the next location will not be a replication of the current Sweeney’s Gym. He wants to broaden his horizons, cater to a different niche market, and appeal to a new audience.

“There are so many different concepts, ideas, atmospheres, and emotions behind fitness” explains Michael, who says that there’s a niche market out there that hasn’t been tapped yet, and Sweeney’s Gym wants to explore and embrace it. Over the years, Sweeney’s Gym has developed and evolved from amateur training in Michael’s parents back garage into a very successful business that continues to grow. “Hi, I’m Michael Sweeney; I work out. This is what people think I do all day, which is funny because I don’t. Sweeney’s Gym is still a business. It needs to run and function like a business. We have to offer a service, and offer value for that service. Anyone can offer dumbbells and treadmills, but you need to offer more value behind that.” Michael has cultivated the Sweeney’s Gym brand to encompass a sense of community, comfort, and no hassle. Because Michael has stayed true to his core philosophies, Sweeney’s Gym has experienced tremendous success in the past ten years, and is looking forward to continuing to grow in the near future. Thank you to “The Gateway To Milwaukee” for doing this story on Sweeney’s Gym and Michael Sweeney #PowerBySweeney